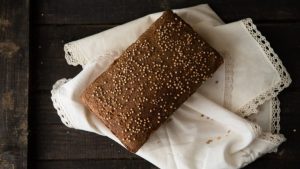 Bread is probably one of the foods that has been most changed over the years.  Gluten content has been increased to make a lighter, larger loaf.  Even whole grain bread contains gluten, and this gluten can contribute to inflammation in the body, especially the gut, and increase blood sugar levels dramatically… In fact, some blood sugar tests have shown that 2 slices of “whole wheat” bread can spike blood sugar as high as an equivalent amount of calories of pure table sugar.

Gluten has become such a problem in modern diets that we now have gluten free bread but this bread can often be just as bad or worse as it is highly refined.

If you would like to experience the benefits of not eating bread feel that you would have difficulty omitting it from your diet altogether you may want to consider a different type of bread, one  that is healthier and easier to digest and the type of bread that our ancient ancestors would have eaten.

This bread is sourdough bread and it is made in an entirely different way to the commercially prepared breads and gluten free breads. Sourdough is a fermented bread, and the fermentation process makes it easier to digest and less likely to spike blood sugar levels, while also making the gluten in sourdough bread easier to digest than your standard loaf.

The earliest sourdough bread is thought to date back to 3700 BC[i]  Sourdough bread is popular in San Francisco after it’s methods for baking were brought to this area of the United States by French bakers during the gold rush.  It’s also still popular in France as well as other Mediterranean countries.

The ingredients that makes sourdough different is the use of wild yeast and lactic acid bacteria. Lactic acid bacteria are the same type of beneficial bacteria found in fermented foods such as yogurt, pickles, kombucha, sauerkraut and kimchi. Wild yeast is used in cultures all over the world in food preparations. For example  in Sudan, kisra is made with fermented dough, in Ethiopia they make injera (teff), in Ghana kenkey, in India idli breakfast cakes, made with rice, beans or chickpeas, and the Turkish make bona `( a ferment drink) generally with wheat, maize, sorghum, or millet

The wild yeast gives sourdough its distinctive flavour, but it also provides many other benefits:

Unfortunately, not all commercially prepared sourdough is genuine sourdough and therefore will not contain the nutrient benefits that real sourdough contains.  Other factors that affect the quality of sourdough include the length of time for which it ferments, and how long it is kneaded.  If you want to buy sourdough, I would recommend buying from an artisan bakery where you can ask about how the bread is prepared.

But why not invest a little time in understanding how your food is made by making your own sourdough. Here are some useful links for sourdough recipes:

As a final note please remember that sourdough is still made with wheat and so should still be eaten in moderation.

Blog kindly provided by Sandra Leyland Williams from The Essence of Health.

Sandra works at Beehive as a nutritional coach, raw food teacher and holistic therapist, and is always delighted to share her knowledge with anyone looking to improve their health, look fabulous and feel much younger than their age.

[i] The Encyclopaedia of Food Microbiology, Michael Gaenzle

This website uses cookies to improve your experience while you navigate through the website. Out of these, the cookies that are categorized as necessary are stored on your browser as they are essential for the working of basic functionalities of the website. We also use third-party cookies that help us analyze and understand how you use this website. These cookies will be stored in your browser only with your consent. You also have the option to opt-out of these cookies. But opting out of some of these cookies may affect your browsing experience.
Necessary Always Enabled
Necessary cookies are absolutely essential for the website to function properly. These cookies ensure basic functionalities and security features of the website, anonymously.
Functional
Functional cookies help to perform certain functionalities like sharing the content of the website on social media platforms, collect feedbacks, and other third-party features.
Performance
Performance cookies are used to understand and analyze the key performance indexes of the website which helps in delivering a better user experience for the visitors.
Analytics
Analytical cookies are used to understand how visitors interact with the website. These cookies help provide information on metrics the number of visitors, bounce rate, traffic source, etc.
Advertisement
Advertisement cookies are used to provide visitors with relevant ads and marketing campaigns. These cookies track visitors across websites and collect information to provide customized ads.
Others
Other uncategorized cookies are those that are being analyzed and have not been classified into a category as yet.
SAVE & ACCEPT

PLEASE NOTE -  Please continue to WEAR A MASK in our reception area (unless you are medically exempt) and please continue to maintain social distancing during visits. This is because as a health centre we have clients who attend and are in a high risk group.

Our priority is safety of clients and professionals and contact based services continue with appropriate PPE being used.