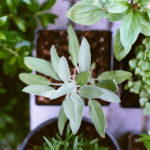 Our herb of the month for March is sage. Sage (Salvia officinalis ) is native to the Mediterranean but is well adapted throughout Europe and North America.

In Britain, sage is listed as one of the essential herbs along with parsley, rosamery and thyme but has many other uses in medicine, magic, not just meal preparation. Poets, shamans, herbalists, cooks, emperors, and common folk have touted its virtues for thousands of years now. The Romans revered the herb as a sacred plant, and it is believed that the Egyptians used it to treat the plague.

Nicholas Culpeper, the seventeenth-century herbalist and astrologer, believed sage was under the dominion of Jupiter. Folk belief placed the herb under the influence of Venus, and sage was traditionally used to aid conception. One folk tradition encouraged eating a bit of sage each day during the month of May to assure immortality. Although it failed to live up to this promise, sage was traditionally planted on graves (encyclopedia.com).

Research published in the June 2003 issue of ‘Pharmalogical Biochemical Behaviour’ claimed that sage can act as a memory enhancer.  A study using 45 young adult volunteers reported that even the 50-micro dose of sage significantly improved subjects’ immediate recall.

In other research presented at the British Pharmaceutical Conference in Harrogate (September 15-17, 2003), Professor Peter Houghton from King’s College provided data showing that the dried root of Salvia miltiorrhiza, also known as Danshen or Chinese sage, contains active compounds similar to those developed into modern drugs used to treat Alzheimer’s Disease. Sage has been used in the treatment of cerebrovascular disease for over one thousand years.

In the garden, sage is easy to grow and hardy throughout winter- a perfect reason to keep this herb handy and make it a regular fixture in the kitchen. And if you don’t fancy growing it yourself, look to buy fresh sage over the dried form of the herb- the flavour is incomparable!

So, grow some, chop some, cook some, eat some! Bearing in mind all the benefits of this herbs, we’ve decided to put together a few of most delicious recipes from around the web.

1/ Green beans with sage and pancetta from The Guardian 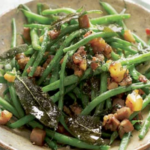 Bring a pan of salted water to a boil. Cook the beans until just al dente, about four minutes, then drain.

While the beans are cooking, warm the butter in a large frying pan and sauté the pancetta until it begins to take on some colour. Add the shredded sage leaves and fry for another minute.

Tip in the beans, season, and give everything a good stir.

Keep warm. In a small frying pan, warm the oil over a medium-high heat. Sauté the whole sage leaves for a few seconds until crisp, scatter over the beans and pancetta, and serve.

2/ Sage and onion stuffing balls from The BBC Good Food 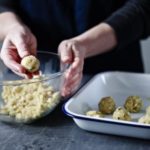 Preheat the oven to 200C/400F/Gas 6. Heat a frying pan until medium hot, add the butter, onions and sage and fry gently for five minutes until softened. Place the breadcrumbs in a bowl with the softened onions and mix to combine. Add the egg and season with salt and black pepper. Mix well then form into golf-ball sized balls and place on a roasting tray. (If making in advance, the stuffing can be frozen at this stage.) Roast in the oven for 20 minutes until crisp.

Place the breadcrumbs in a bowl with the softened onions and mix to combine. Add the egg and season with salt and black pepper. Mix well then form into golf-ball sized balls and place on a roasting tray. (If making in advance, the stuffing can be frozen at this stage.) Roast in the oven for 20 minutes until crisp.

Mix well then form into golf-ball sized balls and place on a roasting tray. (If making in advance, the stuffing can be frozen at this stage.) Roast in the oven for 20 minutes until crisp. 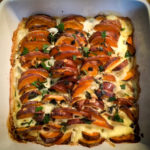 Wash and slice the sweet potatoes into approximately ½ cm slices (no need to peel).

Put the sliced potato into a bowl and add in all the other ingredients except for the cream. Mix well and then arrange the potatoes in lines in a deep ovenproof dish, quite tightly packed together.

Put any excess bits of sage and garlic from the bowl on the top of the potatoes.

Cover the dish with foil and roast in the oven at 200 degrees for 45 mins. Remove the foil and pour over the cream.

Put back in the oven for 25 minutes by which time the cream should be thicker and the potatoes soft.

Sprinkle over the remaining sage and serve. Delicious as an accompaniment to roast lamb or with fresh bread and a green salad dressed with a little bit red onion and parsley dressing.

Check out our other herbs of the month

PLEASE NOTE
We have closely followed government guidance and are open under heavily restricted hours and by appointment only. Please see our guidance for phased reopening on 1st July HERE

Are you visiting our website due to gestational diabetes under The Countess of Chester? Please note we are open for collection of blood monitoring kits on Tuesday and Thursday from 9am until 6pm. The Countess of Chester information is available here and a link to Google Maps to help you find us is here. We have a free car park at the rear of our building.

For the most up to date advice on other services at Beehive, please contact the service you have your appointment with, especially if you are unsure whether your appointment has been cancelled.

We continue building an Online Community Hive. A signposting service for where to access information from our professionals and others in the local community. Take a look and keep checking as it will continue to grow as our professionals produce more content.

This website uses cookies, if you continue to use this site we will assume that you are happy with this.OkRead more