It turns out our brains, like our bodies in general, are far more likely to deteriorate from under use than to wear down from overuse.

Exercising the brain, and the body it is attached to, becomes more important as we reach middle age. It is one of the few reliable ways to offset the natural deterioration process and the damaging influence of our more sedentary modern lives. It also points to new possibilities for the brain to heal itself in the face of disease and trauma.

For decades Physicians and Scientist generally believed that the prognosis for most brain problems was grim. The understanding at the time was that the brain structure was effectively like “hardware”.

Neuroplasticity is changing our understanding

Fast forward to increased understanding and now the mainstream view of neuroscience and medicine is that the living brain is actually “neuroplastic” – meaning its “circuits” are constantly changing in response to what we actually do out in the world. For far from being hard-wired, the brain has circuits that rapidly form, un-form and reform.

A brain with Alzheimer’s, the most common form of dementia, turns out, by various measures, to be a brain that is losing overall plasticity. It shrinks and looses connections. But a growing body of research has found that exercise, both mental and physical, can lower the risk of experiencing dementia. Research carried out by the Cochrane Institute of Primary Care and Public Health at Cardiff University, released results from the most detailed study ever done of the effects of lifestyle and exercise on the risk of getting dementia. Researchers followed 2,235 men, almost all inhabitants of Caerphilly South Wales, with initial ages of 45 to 59 years old for 30 years. They found that men who consistently did a few things reduced their risk of cognitive decline and dementia by a staggering 60% These activities included eating a healthy diet,(at least 3 servings of fruit and veg per day)maintaining a normal weight, with BMI 18 to 25, limiting alcohol to about a glass a day and no smoking.

Exercise has a positive impact!

The activity with the biggest impact was walking at least 2 miles a day, biking 10 miles per day or engaging in regular vigorous physical
exercise. The researchers in Wales followed at least 10 other studies showing that exercise in midlife was associated or correlated with lower 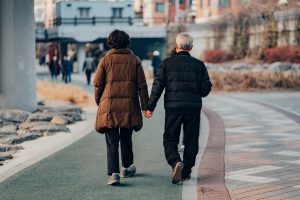 rates of dementia, and that a lack of regular exercise corresponded with higher rates of dementia. Earlier studies showed aerobic exercise increased the brain’s grey and white matter in the frontal lobes, areas involved in planning and goal-directed activity. Exercise triggers the growth of new brain cells in the hippocampus. It also triggers the release of “neurotropic growth factors.” This is a kind of brain fertiliser, helping the brain to grow, maintain new connections and stay healthy.

Frederick Gage of the Salk Institute, co-discoverer of stem cells in the brain, has suggested that new cells arise from long walks because, in an evolutionary sense, our bodies associate the exertion with moving from an existing territory, which had perhaps become depleted of food or too dangerous, to a new, unexplored territory whose details must be learned. In anticipation, the brain releases new cells and growth factors, which create a more plastic state and make possible new neural connections. This may be one of the mechanisms by which exercise helps to protect against diseases such as Alzheimer’s.

So with that in mind it is never too late to get some exercise and improve your diet. Every piece of action you take helps positively contribute to your brain's plasticity and works to lower dementia risk!

Excerpts taken from a paper by Norman Doidge, who teaches at the University of Toronto’s department of psychiatry and is author of 2 books on the subject:

The Brain that Changes Itself

The Brains Way of Healing

Linda's journey into Amatsu (a traditional Japanese healing physical therapy) came from a back condition which was not getting better using medical intervention. Alongside this she has developed her understanding of the way the mind can have a huge impact on health. Neuroplasticity is a particular area of interest for Linda and she brings this knowledge into every treatment session to assist clients.

Image by geralt on Pixabay

Photo by Daniel Bernard on Unsplash

Image by chulmin park from Pixabay

This website uses cookies to improve your experience while you navigate through the website. Out of these, the cookies that are categorized as necessary are stored on your browser as they are essential for the working of basic functionalities of the website. We also use third-party cookies that help us analyze and understand how you use this website. These cookies will be stored in your browser only with your consent. You also have the option to opt-out of these cookies. But opting out of some of these cookies may affect your browsing experience.
Necessary Always Enabled
Necessary cookies are absolutely essential for the website to function properly. These cookies ensure basic functionalities and security features of the website, anonymously.
Functional
Functional cookies help to perform certain functionalities like sharing the content of the website on social media platforms, collect feedbacks, and other third-party features.
Performance
Performance cookies are used to understand and analyze the key performance indexes of the website which helps in delivering a better user experience for the visitors.
Analytics
Analytical cookies are used to understand how visitors interact with the website. These cookies help provide information on metrics the number of visitors, bounce rate, traffic source, etc.
Advertisement
Advertisement cookies are used to provide visitors with relevant ads and marketing campaigns. These cookies track visitors across websites and collect information to provide customized ads.
Others
Other uncategorized cookies are those that are being analyzed and have not been classified into a category as yet.
SAVE & ACCEPT

PLEASE NOTE -  Please continue to WEAR A MASK in our reception area (unless you are medically exempt) and please continue to maintain social distancing during visits. This is because as a health centre we have clients who attend and are in a high risk group.

Our priority is safety of clients and professionals and contact based services continue with appropriate PPE being used.